There is absolutely no words to put in a phrase a sentence to describe the moments following the machines being unplugged from your child.  There was a solemn voice of hope inside my heart that she would continue to breathe on her own or revive herself, but the reality sank in as the shade of her skin turned a blueish gray.

We sat together in the hospital room in PICU as the nurses came in to unplug Madilyne from the machines.  She was pronounced brain dead at 9:50am on April 14, 2005 and unhooked 5 minutes following..

I knew in my heart that if, IF, my child had to be "let go" and I was going to send her to God, tat in my arms she would remain during her flight.  The machines began beeping uncontrollably, she didn't move.  There was a calming peace over her face and body, and I held her as she went to be with God.  It was so unreal, so surreal, the shock of what was taking place would take years to overcome, if ever. 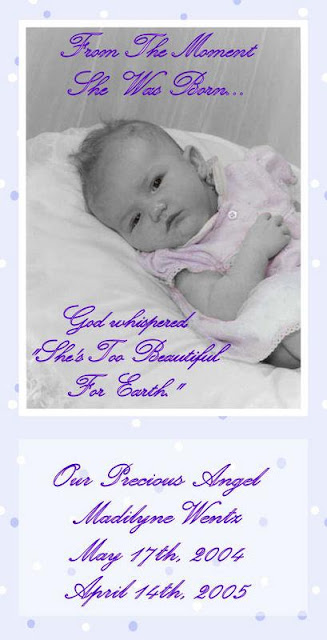 I sat there with her in my arms for a while, as others anxiously awaited to hold her, for the last time.  She was flying home, home to a place where harm could never be close to her, a place where she could run again, and a place where I prayed God would place her upon his knee and tell her about me.

What would I do, I couldn't move I couldn't speak, the tears ran dry as I filled a sea with them in the prior days.  I knew she was safe, I was not sure how I would go on, but I knew it was through her I would find my way.

Every parent's nightmare had just presented itself in front of me.  I knew we had a confession from the perpetrator, but how would that carry itself out.

My family took me by my hands and lead me out of the hospital.  A good friend and coroner from our home town called to say he would fly down in his plane and bring her home for burial.  After leaving the hospital I didn't want to sleep, I didn't want to eat, talk, ride in a car, nothing.  I just went where my family asked me to, in a mode I refer to as survival mode.

There was so much shock instilled in my veins, I know we drove some 4 hours home, but I do not remember the drive.  I do not remember saying more than asking if my brother and his soon to be wife would be there with us for a while.

Family began to arrive from near and far once we arrived home.  Madilyne's Father came by my parents home to do a task neither of us should of had to do.  The funeral home came over to assist in picking out her casket, the most heart wrenching task other than leaving Madilyne at the hospital knowing I had her diaper bag packed in the car for her exit rom the hospital.

We picked out a casket that held meaning to us.  Angels wear white and more than a few places donated burial dresses for us to choose from.  A local printing company printed her funeral programs, and leading up to the funeral, family and friends came from near and far.

The hurtful comments flooded in, such as "I can not attend her funeral because I can not handle it". Or friendships abruptly ended even then because others couldn't bear the truth.  Neither could I.  I continued to walk in a daze, in a haze of shock and disbelief and no matter what I wanted or didn't want to do I did it because it wasn't about me.. It was about my child, my daughter the love of my life.

The visitation was hard, I remember standing outside most of the time, because I could not get near the casket.  We had an open casket because I wanted the world to see what the monster had done to her..  It didn't look like her.. but I will never forget those last moments..

Then came the funeral.  I was very thankful for the side room because I knew I would not handle anything as I thought I would and I knew I just needed to let myself go and feel and act the way I needed to for the time and the reason of that day.  I ended up throwing up 3 times prior to leaving the funeral home because I could not contain the overwhelming emotions, knowing we were on our way to put my child forever in that box in the ground..

The drive to the gravesite, though only a few miles seemed to take forever.  I didn't want to ride in the limo.. it is a luxury, who cares about "things" when this is happening.. I just wanted her back, I wanted everyone to go away and I wanted to just have one more day.. even though that could never happen, ever again... 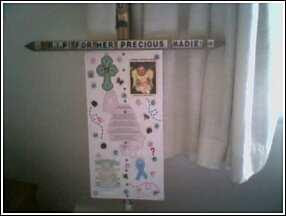 After her burial, I had often wished as the months grew on that I could have wrote on notecards, asking family and friends to leave after the burial and come back in 2 months or 2 years when the grief would worsen and their lives would go on, and make me go to the movies or make me go out to dinner, because the more time went by, the more lonely life seemed to get, because my life was still at a stand still, there were no steps forward, or getting over it, or moving past it.  The worlds stopped turning, and came to a complete halt..

I never could ever forget the gracious hearts of those surrounding Madilyne and my family, but within grief it can be selfish to some that do not understand the extent of one's grief, because no matter what is happening and who is there its still lonely, and you feel alone.. because a giant piece of your heart is forever gone.

Through the deepest depths I have lived to present day, but how?  Part 4 comes soon, stay tuned.